The art market is on the threshold of big changes that can be brought with Blockchain technologies. Blockchain suggests the decision for the key stumbling blocks of art market such as questions of provenance, transparency, copyright, ownership, valuation and authenticity of art. The actuality is provided by growing online art sales – $3.75 bln in 2016, which was an 8.5 percent share of the overall market (up 15 percent from the year before). Seeing the potential, art startups are already building real-world applications based on Blockchain.

These are the key stories of purchasing art with cryptocurrencies and the ideas of how to start your own Blockchain-based art collection.

The very notion of Blockchain and cryptocurrencies is the source of inspiration for artists. Actually, art is currency itself. Its high value had been proved by centuries. So the idea of buying art for cryptocurrencies has something relevant with natural exchange. If art is a currency itself, Bitcoin[1] at some point is a piece of art.

That is what a work by Peter Fröhlich[2] about. The author describes the work:

“Mounted on a rosewood panel, inside the baroque gold-plated frame is a small computer and four specialized computing units producing Bitcoins, the most known and used cryptocurrency. The small display shows the current rate of calculation and the exchange rate of Bitcoins to euros.” Another example of Bitcoin inspired art piece is the painting by French artist Youl “Last Bitcoin Supper” that was sold in 2014 as a part of “Project Bitcoin[3]” at eBay auction for 4.64 BTC. The author of the project Bitcoincito tells about the painting:

When we started throwing around ideas for the painting, I was struck that we both had stumbled upon the same basic thought: Bitcoin as Jesus. We saw Jesus as a messianic figure who fundamentally changed the world… and for that change, he was both worshipped and despised. We felt that Bitcoin has taken a similar role: thoroughly world-changing, but also worshipped and despised.

After days of discussion, we decided Youl would paint a huge 140×70 centimeter canvas interpretation of Da Vinci’s Last Supper. We believed that Youl’s painting could tell the story of bitcoin with a profundity few words could even approach. 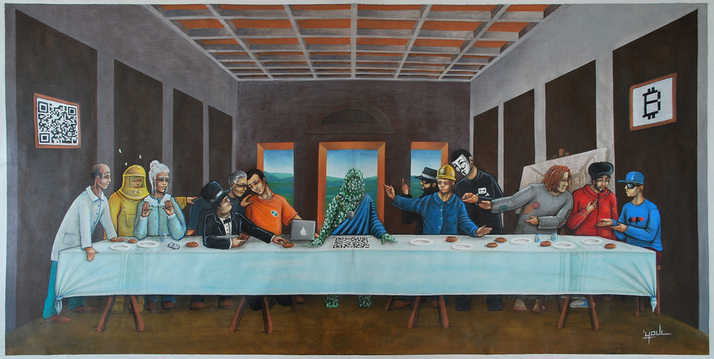 Today the number of Bitcoin/crypto-based artworks became very big. One of the cases when this kind of art was available together – Crypto Art Gallery[4] event in Manchester, UK on April 9th 2017. As a line up of the event, there was a work Two Minds/One Love on sale for five BTC.

Bitcoin inspired art by its atmosphere can be compared with street art. They have equal ideas of existence on the fringes of the law; rejecting official institutions like art galleries, museums, art schools or banks; being generalized, controlled and sustaining by independent, often anonymous, artistic community and society.

Moniker Art Fair that is known to specialize in street art and urban culture in 2015 became a pioneer in using Bitcoin in an art fair context. The tickets to the Fair were available for Bitcoins and visitors had the opportunity to learn about cryptocurrency through 15 meters interactive installation titled ‘The Renaissance is Now[5].’ The installation included a Bitcoin ATM for anyone inspired to try out the digital currency on the spot. 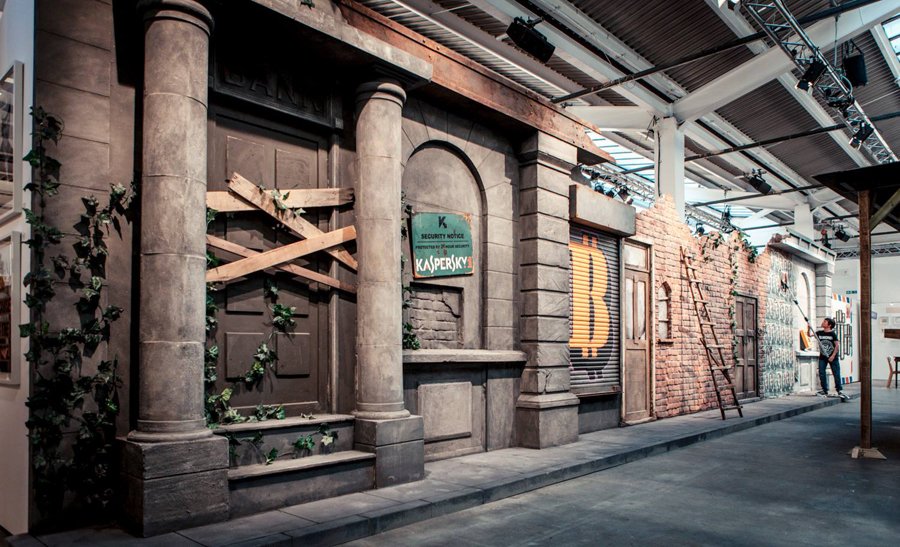 Another cryptocurrency project that inherits anonymity of street artists is called Scarab[6]. The Scarab Experiment is an attempt to create a kind of ‘virtual artist’ using decentralized technology. Scarab is an artist as persona formed through community, which removes the individual identity and creates a collective artist. One becomes Scarab by participating in the community through making artwork for submission and/or by voting. Artists compete for their art to be officially signed and sold as a ‘Scarab’ piece. Participants in the experiment will jointly create a new artistic personae, complete with a portfolio of up to 50 pieces of work. To be able to participate and become a part of the community one need to hold at least one Scarab Token. When a piece of artwork is sold, all token holders will receive a royalty payment as a reward for their participation.

Together with spontaneously developing Bitcoin-related art, there are cases of implementation Blockchain and cryptocurrencies in traditional art institutions.

The first case goes back to 2015 when Austrian museum of applied art MAK purchased an online installation, an algorithmically-generated screen saver by Dutch artist Harm van den Dorpel “Event listeners[7].”This screensaver became the first piece of art ever to be sold for Bitcoin to a museum. 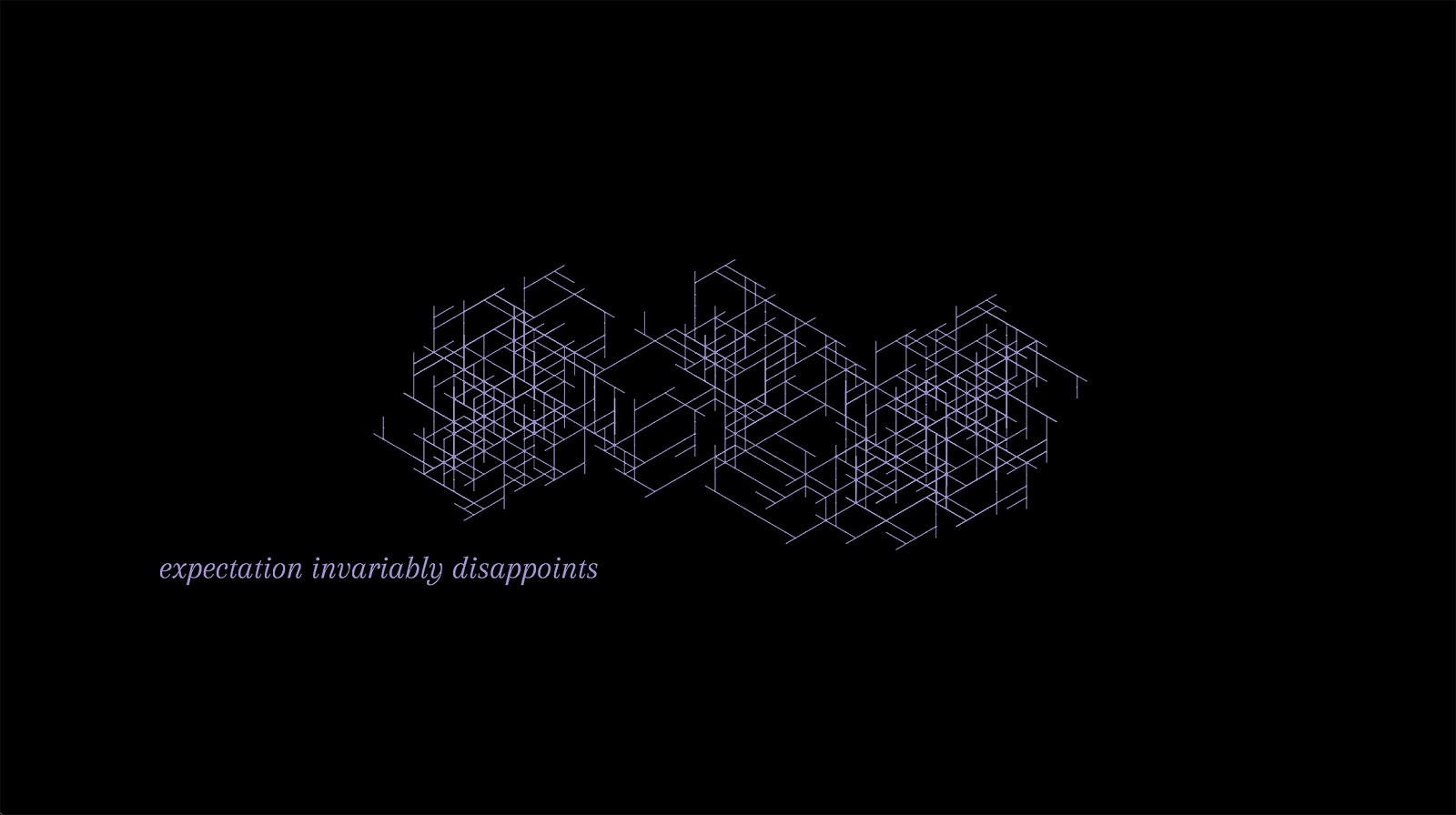 If purchasing art for Bitcoins is yet too radical to be normal practice for museums, Blockchain technology itself is much more acceptable by official art institutions. From Sept. 1-10, 2017 the State Central Museum of Contemporary History of Russia in Moscow hosted the world’s first CryptoArt, an exhibition project organized by Rudanovsky Foundation. The Foundation presented a qualitatively new platform for art communication based on the works of the contemporary artist Svetlana Smirnova. Each picture was provided with an open digital VerisArt certificate, based on Blockchain technology. With Blockchain it is impossible to destroy or falsify the primary detailed information about works of art, provenance and history of displacement. This provides the basis for true security and transparency. Technology gives access for open and transparent relations among museums, auction houses, galleries, collectors, art historians and researchers.

There are fans of the idea to sell art for cryptocurrencies in gallery business also. In summer 2017 Dadiani Fine Art[8] became the first gallery in Britain to accept Bitcoin and other cryptocurrencies for works of art. Buyers at the Cork Street gallery in the heart of Mayfair’s traditional art district will be able to use any of the following six cryptocurrencies on the market: Bitcoin[9], Ethereum[10], Ethereum Classic[11], Ripple[12], Litecoin[13] and Dash[14].

One of the works that can be bought with cryptocurrencies in Dadiani Fine Art gallery is a series of 18 sculptures by Mike O’Connor, each one created from the original Inconel exhaust systems, they are entitled “The Noise.” The exhaust systems are from the infamous Ferrari “056” engines 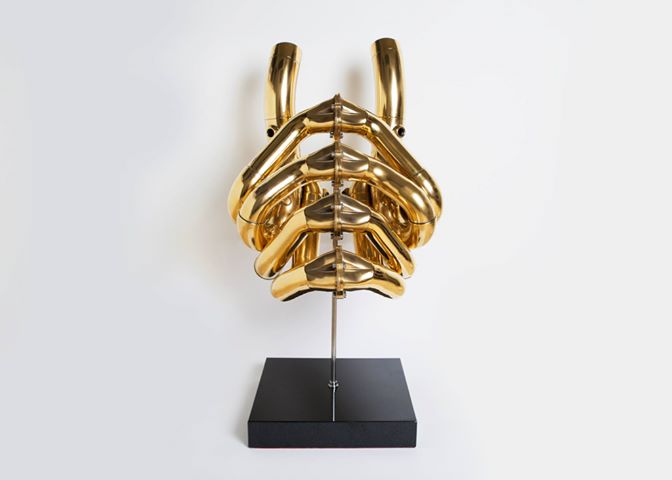 Maybe the most important contribution made by Blockchain technology to the art world concerns digital art. Today, digital art takes on many forms, all made with the aid of a computer. Digital art can be sketches that are originally on paper, but scanned and edited on the computer or maybe Photoshopped images or CAD designed models. Digital artists face many issues when it comes to protecting the authenticity and ownership of their pieces, and this is particularly true with images. With Blockchain technology it becomes possible to collect and systematize digital art because Blockchain can be compared to copyright. For a long time, the only way for artists to really build a market around their digital works has been to convert them into physical forms. Blockchain technology solves the problem of provenance and verification of an art piece. It provides an ideal solution to preserve intellectual property, create demand and increase value for digital content.

The successful startups like Monegraph, Ascribe, Verisart suggest the opportunity for the art world to ascribe authenticity to any image. These startups use decentralized technologies to help artists and collectors with new ways to certify, document, verify and enliven their works. The Blockchain is used to build a worldwide ledger of art and collectibles, coupled with museum standard meta data, to provide immediate value for artists, collectors, apparaisers and insurers.

Starting your own collection of art

Blockchain technologies change the major principles of art collecting. Traditionally art collectors were extremely rich people. The art market is one of the most conservative, where old and big auction houses like Christie’s and Sotheby’s are unconditional dominants.

Blockchain and cryptocurrencies can make art market transparent and more democratic. One of the promising startups is called Maecenas and it uses Blockchain technology to create tamper-proof digital certificates linked to pieces of art. A single artwork is broken down into thousands of certificates, similar to how a public company issues shares. Investors can then purchase these certificates to own a percentage of a given artwork, and they can sell them back to other investors at any time via the Maecenas exchange.

While waiting for new startups that democratize access to fine art, we suggest you a list of digital art works available for cryptocurrencies right now:

Available at “left gallery[15]” through ascribe platform or here[16]. 4. ICONIC – digital biennale on Blockchain. The top three artists will get prizes of one BTC for the Winner, 0.5 BTC and 0.3 BTC for the runners-up from ICObench. The top three will be chosen by the curators. After the artwork is sold on the Art Market, the artists recieves 75 percent of the price, the organizer receives 22 percent, and the curator that assigned the price for the artwork receives three percent of the price. The sale starts on Feb. 2nd, 2018.