Qtum, a Blockchain project focused on Decentralized Applications[1] (DApps), announced on Twitter[2] Friday, Feb. 2, that the “first ever space-based Blockchain node,” made by Qtum, has been launched on a Chinese satellite.

We have lift off of the first ever space-based blockchain node https://t.co/72wWxjuTz4 #decentralized pic.twitter.com/E779bbmhc9[3][4][5]

Qtum had reported the launch date[7] on Twitter on Jan. 31, with a link to a countdown to Feb. 2.

However, Friday, the day of the launch, the countdown was replaced with a link to the China National Space Administration website’s press release[8] on the successful launch of the Zhangheng-1 satellite. Qtum and Blockchain were not mentioned in the press release.

Users on the r/Qtum subreddit expressed confusion[9] over the disappearance of the website countdown, asking for more information about the success of the launch. Qtum’s Telegram channel had posted a YouTube video[10] of a satellite launch today, with subtitles overlaid saying it was footage of the “first Qtum POS node in space today.”

Qtum’s DApps are unique from those based on Ethereum[11] because the platform uses the Unspent Transaction Output (UTXO)[12] Blockchain model, enabling more lightweight smart contract interactions with mobile and IoT[13] programs.

In an interview with Tech in Asia[15] in November 2017, Zheng Zuo, the CEO of Spacechain, had spoken about the projected February 2018 launch date of a Cubesats[16] Spacechain satellite running on a Qtum network.

Spacechain also tweeted a video[17] of the launch today, writing that the rocket was carrying a “SpaceChain satellite and running Qtum full node.”

Qtum had not responded to a request for comments as of press time. 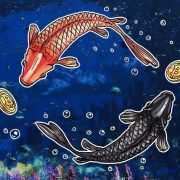