The Eastman Kodak Company announced Jan. 30 that the launch of their cryptocurrency KODAKCoin would be delayed in order to evaluate the status of potential investors. The delay was announced the day before[1] the Initial Coin Offering (ICO) was set to start, according to the project’s Jan. 9 press release[2].

As explained in on the company’s website, Kodak intends to run an ICO that offers security tokens as an ‘exempt offering’ — this means the company does not have to register their security with the US Securities and Exchange Commission (SEC), but only “accredited investors” can participate in the ICO.

The SEC requires that an individual accredited investor[3] have a net worth that exceeds $1 million, or an annual income of at least $200,000, along with other conditions.

The company claims it needs “several weeks” to verify the “accredited investors” status of those who applied to invest in the ICO, which Kodak reports is more than 40,000 people.

Potential investors from outside the US will be considered in accordance with their local jurisdictions, the company added.

According to Marketwatch[4], Kodak’s stock (KODK) prices sharply increased after the press release of the project on Jan. 9[5] from $3.1 to almost $11 the next day. However, after the delay was announced on Jan. 30, the stock dropped by more than 18 percent, and continues to trend downwards Feb. 1. 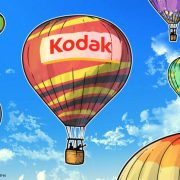 Kodak, a company that seemed dead and gone with the advent of digital photography, just saw a surge today as it announced the creation of its own cryptocurrency. The so-called KodakCoin will be the token that powers the company’s new KodakOne platform[1]. KodakOne will allow photographers to register their images, license them and search the web for unauthorized usage.

“For many in the tech industry, ‘Blockchain’ and ‘cryptocurrency’ are hot buzzwords, but for photographers who’ve long struggled to assert control over their work and how it’s used, these buzzwords are the keys to solving what felt like an unsolvable problem.Kodak has always sought to democratize photography and make licensing fair to artists. These technologies give the photography community an innovative and easy way to do just that.”

Connecting one’s company to Blockchain or cryptocurrency seems to be the latest – and most sure-fire – way of increasing one’s stock value. Long Island Iced Tea company recently changed its name to Long Blockchain[2] and saw its value increase five-fold. While Clarke is optimistic that the new cryptocurrency will revive Kodak’s flagging fortunes, the Financial Times[3] calls the move a “last desperate bid for relevance.”

KodakCoin will be launched by ICO on January 31. The token sale is only open to accredited investors[4].